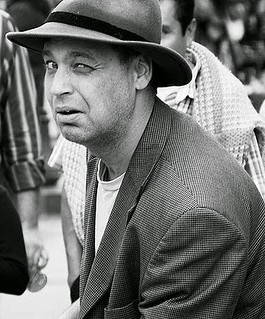 He was standing, reading a newspaper covering his face, and when people passed him, he would dip down behind them and grab their ankles and bark like a dog, or a monkey, or a macaw, and it sent the victims into a panic, screaming, throwing their things into the air.

Before the victims could find the dog, he would leap back to his perch with the newspaper in front of his face, hiding.

He did this many times and the french in the terraces would leap to their feet every time, they thought they were at the opera, clapping violently, shouting, "Bravo! Bravo!" as the victims looked around.

His finale, was when his many victims, peppered all around the street with spilled groceries, met each other, and figured out that it was the stranger with the newspaper. I saw the victims all point at the stranger, I saw the paper tremble, I saw him peek out the corner of the paper, and I saw old ladies beat that man with purses and umbrellas.

And then I saw the french again in their terraces, on their feet shaking their heads euphorically, clapping and shouting, "Bravo, Bravo...Oh Bra Vo!"

When it was over, he limped to the terraces with his hat out shouting, "you laugh, you pay!" as he collected table to table.

It seemed almost spiritual how the stranger knew them.

I couldn't compete with this anthropological genius, I was just an american with a smoking problem on the streets of Paris, so I grabbed a Crepe Sucre and a Cup Of Tea and started the long walk to the Eiffel tower to work for tourists.

I had been to Paris five times and never seen it before, because I'm a worker, not a tourist, I've been to many cities and never seen the important attractions, but I felt it was getting ridiculous that I had never seen The Eiffel Tower.

When I got there, there was bands of gypsies littered around the out skirts of it. I looked up and was impressed at it's height and looked down and noticed it was based on a giant square plaza full of meandering tourists, and I thought to myself,

OK great, I can work this!

Posted by Jimmy Talksalot at 10:04 PM