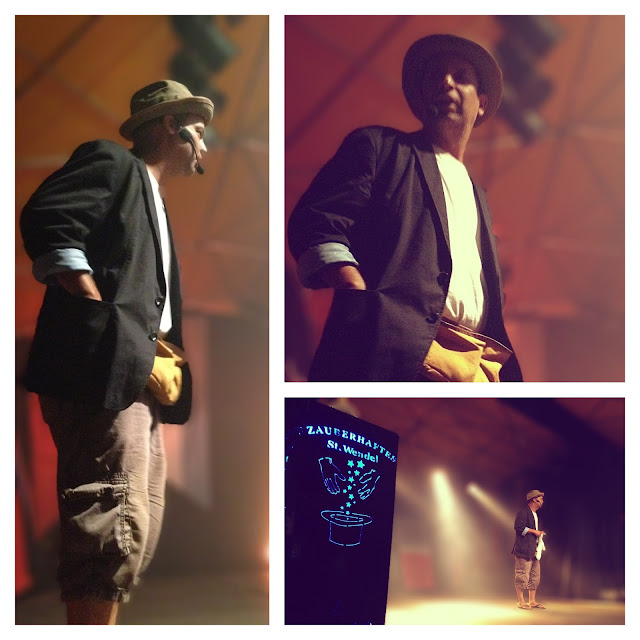 biggest thing to happen to me as a street guy.


for the first time in my life i was judged by my skills as a street guy and not by how good of a festival show i did.

which was good for me and Gary Animal (who won the best comedy award), because we were workin from our pockets with no sound equipment nothin!

infact it was difficult for me to get rigged up with a mic for the gala appearance on stage, because i was doing tricks that use my mouth and a lot of body and clothes action.


there were acts ten times better then me for the festival, but they judged me on my street skills.


and let me tell ya there was no way i stood a chance against ted, this guy worked with cellini on the road and completely mesmerizes his audience...he was funny, but this was no question a magic act. he's an older guy and he has serious powers over the audiences suspence of belief.


He did simple, small, and mostly original tricks done big and impecably. it was a huge honor to work with this master, definately one of the last of the old masters...gives me chills, just thinkin about it.


this festival was the single most important thing to me. the past line up for this festival was real street guys, all the masters. i had absolutely no intention of winning any prize i just wanted to hold my own. infact when gary animal told me i had won 2nd just before i went up on stage for the gala i thought he was tryin to pull my leg so i'd botch it, (me and gary had become good friends at the festival and were jokers).


after my gala performance i almost broke down emotionally infront of the audience thanking them for welcoming me to the festival and all it meant to me.......they thought i knew i had won, but it was anounced in german so it wasn't later till i had figured out that i was a winner.


the photo of me is at the gala.


throughout the festival i worked around the town streets.

there's a bunch of photos and stuff of it on my facebook.

the gala is a last chance time for the people of st. wendel to see a little bit of what the international performers can do, and it's the place where they announce the winners.
.
.
Posted by Jimmy Talksalot at 6:53 AM