IT'S HARDER TO DO IT THE MASTERS WAY. 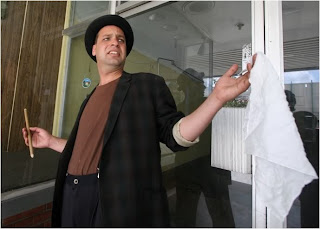 it should be understood i am not calling myself a master by any stretch..lol

any shmuck can get an amp a table and two generic tricks and clap and cheer an audience into paying a big hat.

believe me, i've done it many times.

it's even easier to just clone a show that works.

they can do this and call themselves a magician and if they make enough money the "magic community" will follow them around and honor them like lap dogs hoping for crumbs to fill their egos.

but this don't make it true.

the fact is.....it's difficult to be a real magician.

first off, you have to be one.

and being one has a whole lot more to do than just having chops. skills alone don't make a magician.

how are you gonna convince laymen your a magician if you don't believe it?

second, you have to just suck it up and embrace the fact that you are one.

and stop trying to be something you're not, to "please" the people around you.

you're not doing any one any favors.

third, you have to devote your life to it.

being a magician is a state of mind, life style, a practice, and a real person.

being a magician is a like a disease, the victim can't be anything else.

it literally consumes him.

i believe we were born this way.

i believe merlin was from the same stock as us.....only better.

ask yourself, if there was such a thing as a real magician, what would he do for a living?

what and where would he eat?

how would he commute?

the fact is a magician is a wise man, worldly, theatrical, eccentric, with extensive knowledege of the sciences, the occult, spiritual, supernatural, and bizaar things.

he is a master of ESP and psycology. he can conjure with his hands and if he's any good no one will know this.

society relys on him to entertain, educate, give hope, and protect them from charlatains.

and to fill in many other holes that the modern world just can't fill.

being a magician is a lot bigger than all the things i've listed here, but i am limited in space and in time.

the point is, to try and master this takes commitment and disipline....even if you were born one.

any body can buy a gimmick, but in the hands of a magician it becomes real.

because to him it's not a sneaky trick to decieve people, it's an ancient real magic device to make stuff appear and vanish etc. it's a tool to make magic happen.

an amatuer or a layman can't grasp this, they think magic is a trick and or superstition....they don't really understand that magic is a real thing.

whether it's trickery, illusion, or assumption, is irrelevant....we're talking about magic remember, not empirical science, different subject.

is a nightmare any less frightning, because it happened in a dream?

is a movie really not real...than what were you doing for two hours at that theater?

movies, books, and other art forms are real. they time travel and create real moments and dramatically change the world.

this is why real magicians are artists, - NOT craftsmen.

a carpenter can make a chair, but an artist creates one....this is harder.

....so, when your out there on the street representing us magicians remember this.

i know it's easier to just listen to those "get rich quick" buskers who call themselves craftsmen, who tell you to forget about magic.

they'll tell you to just clap and cheer them and stay focused on the money and treat it like a sales presentation.

they will tell you people like sheridan or cellini's style wont work now...but just remember sheridan and cellini and the many other masters could do it because they had talent and didn't need to rely on cheap gimmicks or extortion to make their living, they didn't have to.

their work spoke for itself and got the people to stop, stay, and pay.

there are plenty of performers doing creative quality shows out there right now, making a great living.....it's just harder that's all.

try and remember who we are and how we represent ourselves and our art.

after all the streets are an escape from conforming to the business machine....don't make them the same nightmare we ran away from in the first place.
Posted by Jimmy Talksalot at 1:10 PM 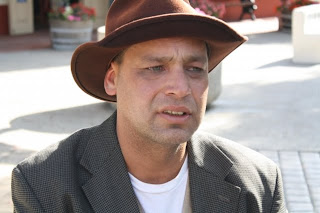 I did an interview about busking in San Diego on a podcast for City Beat Magazine, I hope you'll check it out HERE

You can download the podcast.
Posted by Jimmy Talksalot at 5:17 PM 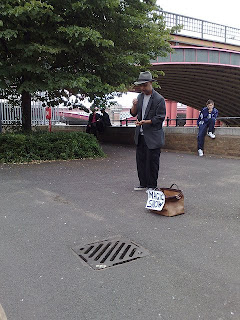 this of course is written for the beginner.

the key to busking i think is;

this is what matters most.

it doesn't matter how long your show is, or how big or small it plays.

what matters most is, if you got em to, stop, stay, and pay.

before doing a show, KNOW what type of show you are going to do!

close up, or parlor, or stage, on the street, but what ever you do,

you have to set up and organize the crowd to present your work and then get paid to do it.

there is of course different methods to do this depending on the size and length of your show,

and you should choose a method that best suits the need of the show you wanna do.

demands a quick build. and a brisk steady tempo to finale and hat.

to start, the intire crowd walking by on the sidewalk, needs to stop walking all at once and turn to you, then be brought in as close as possible.

this can be done with sharp patter and a simple large visual effect, or mimed in the same way.

after they are brought in, they are held in place by steady mime or patter and presentation.

through out the show they are reminded that they need to tip at the end of the show, and at last, before and after the finale.

2. the parlor or half circle show is the same, except the tempo is slowed and the program will run longer 15 - 25 mins.

after the crowd has been brought in close, for commitment sake, they are backed up to present parlor,

this of course isn't always needed if the crowd is a strongly committed one, as in maybe a festival.

3. stage or circle show can either be started by progressing up the latter from close up to parlor or can be started with a slow build of crowd building instead.

in other words you can entertain your audience with magic while they wait for the audience to get bigger or you can clap and cheer them for the entire time,

and or using other stalling methods some use stand up comedy to entertain them while they wait.

this is needed of course, because a large production usually needs a large audience and it can take awhile for the bodies to move into position.

also the "circle show" has a much slower tempo because it's motivation is different.

it's motivation of course is to attract those who are willing to stay 30, 45, or more mins.

- in choosing the size and method of your show;

it should be understood that a pro can perform any of these, and if you desire to be a pro you will need to know how to do all of them.

different size and method should be used to fit the venue.

but if you have the luxury to do what ever you want on your venue, in other words,

if there is a pitch of any size and lots of foot traffic, then the decision is a simple one, do what you love most.

i have done all of these, but i prefer to do sidewalks, but if i need money i do half circles.

this has worked best for me in my career on the street.

or on the street, if the show turns into that...if that's what the people want, then i will slow the tempo down and put in more material.

the point of all this is to know what the show is going to look like before you present it to an audience,

that way you and your adience will know where your going and what is expected of everyone.

and stop thinking about money......people smell desperation.....do what you love and the money will follow.

it has always been my opinion that no matter what the type of show or work we do on the street we are all in it together,

we are all buskers and should try and stick together.

also, i'm writing this because when ever i am teaching on the street, i have found that beginners are going out there and just trying to make anything work on a wing and a prayer.

don't get me wrong this is great in trying to find your self and what works, but it can be a bit brutal on you.

so i think you should try and invision the show first...after all, how is the audience supposed to understand your program if you don't.

any way, i hope this helped some one.