MAKE YOUR OWN STANDARD. 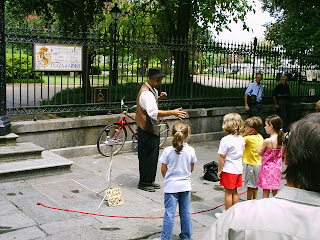 this is really advise

this is probably the hardest lesson i ever learned.....i payed dearly for it i assure the reader.

my teacher told me a long time ago, "make your OWN standard."

i started out doing circle shows, long big, and big money. i felt uncomfortable with them because it felt like it was a long stall, build, and constant begging for money.

another thing i felt is that they had had enough of jimmy talksalot after 20 mins.

i just didn't feel like it was theater like some of my friends who did brilliant, entertaining 45 mins. circle shows....there out there and their great.

i felt like i was turning into one of those stall and extort 45 mins. shows that plague so many streets out there calling themselves buskers.

then i started finding myself loving the 10 min. close up sidewalk/doorway acts, after mastering this i would always look enviously at the circle show acts around me.

so i would try and do large half circle shows and then tryed going back and relearning circle shows, but on my terms.

anyway the whole time i felt like i was betraying what i was born to do.

i watched some of my friends who usually do circle shows trying to do sidewalks with the same feelings...they wished they were doing circles instead, you know what THEY were born to do.

so since i have been doing my sidewalks and half circle shows life has gotten better for me, i am making better money and my show has improved.

granted i'm not making the big bucks like i did with the circles......but as my teacher has always said, "do what you love and the money will follow."

i say if you were born to do circle shows do them!

if you were born to do smaller shows, then do them, but remember the moment you start venturing where you don't belong there will be suffering.

suffering can be good it makes you stronger and wiser and gives you a few things under your belt....but hindsight is pretty important too...know what i mean?

one last bit of business, if you do sidewalks or door way acts.......stay away from the circle show acts.

they need a lot of room and money,

alot of them can't just pick up and move like you,

and if the walkers are a slow trickle, those circle guys are gonna be grumpy that your making money while they arn't.

another thing, don't let your mind get all wrapped up in, how much money the other guys are doin,

or because you think they are getting all the rock star fame because of the size of thier show.

if he's a statue and he's makin less don't judge him, or if he's a circle and makin more, i wouldn't judge that either, because your, WORKING WITH YOUR OWN STANDARD.

a lot of these circle show guys will try and make fun of you for working so hard for so little of money, they will try and recruit you into doing it "their way".

...well i can't tell you how many nights i had to pay hotel bills for my circle show buddies, because we were inna town that wouldn't let circle shows work....i was the only one workin,

once i actually had a circle guy tell me, "you know jimmy you shouldn't sell yourself short with those little shows." heh, it remeinded me of the time another guy told me,

"don't worry jimmy i got us a job driven a truck so you don't have to do that magic trick stuff anymore."

i like to think of myself on a journey with no set destination, if the people are into it, i'll stay longer, if not i'll end with my quick alternative ending and get out.

but this is the point.

what type of show did you design?

anyway....do what you love and the money will follow....AND.....make your OWN standard.

some may think my standard is pretty rich....well i don't think it is.

others make think my standard is bum, well they arn't livin my life, I AM and it's my standard.

i'm happy, my families happy, and my audience is happy...are yours?

your pal jimmy.
Posted by Jimmy Talksalot at 9:00 PM

MY METHOD TO BUILD AND DRAW AN EDGE IN CLOSE. 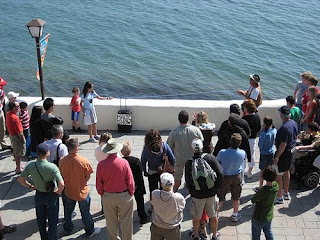 here's how to build an large crowd instantly and have them rush forward all at once into a tight edge.

do a large flashy effect with a lot of energy and noise, suitable for a stage or stadium setting.

repeat this or short routine.

that will get instant crowd.

throw a small object on the ground, one that is a suitable prop for a close up routine. eg. a coin, small crochet ball, thimble etc.

take at least a minute to to talk up the prop and how amazing the trick is that it does.

then tell the people WITH OUT ASKING that if they want to see the trick they will have to come in closer because the object is to small to see from far away.

then wave them in as you look at the object never looking up till the crowd is up to the line.


if done properly they will all rush in very very tight.

if your using a table for a cups n balls show-

the original method was warpos pitch method and was done from a table.

he would do the silk vanish to stop em far away and then tell everyone how amazing the deck was and that if they wanted to see it they would have to come up to the table to see it.

he would put his head down and stare at the deck and wave them in with out looking up until the table was surrounded and then he would begin his pitch.

the thing is i am always asked what if i wanna do close up on the street, how do i get em to stop emediatly and come in where they can see it.

i believe this method is a strong answer to that question.

when doing table walk around you constantly have to break the ice at every table....i've always hated that. i like to spend my time performing not convincing and ushering.

it's just what has worked for me.

your sitting on the couch and a trailer for a movie comes on and you decided if you wanna go see the movie, if it looks good you go to all the trouble to go see it.

what i'm doing is no different, i throw a trailer out there, infact i tell em, "i'm gonna do some tricks first that way you can see if i'm any good if you even wanna watch it."

i have often watched street performers throw a coin on the ground and try and stop people one at a time, "hey do me a favor and watch what this coin is gonna do."

i think this is the worst thing....asking some one to do you a favor, when your the one who is doing them a favor!

those hostages don't stick to the edge, they are always looking for a way out, after all they did you a favor watching the first trick, and if you were any good every one would wanna watch with out having to be asked...right?

anyway i hope y'all get the drift.

showing them a stage or parlor trick from far away where they don't hafta commit and can judge for themselves, i think is the best way to build repore instantly.


after you have repore, throw your favorite close up prop on the ground or table and tell em if they wanna see what it's gonna do they gotta move forward, "CUZ I'M NOT DOIN IT AGAIN!"

never ask some one if they wanna see a trick. a doctor doesn't ask if he can save your life....unless he is known for botching.


"this guy is good did you see the first tricks he did?"

"yeah and he don't care if we watch it or not, he said he's gonna do it anyway, for the people who wanna have fun."

"i wanna have fun"

"man he doesn't care, i never knew a sidewalk could be fun and safe enough to watch a show...."

watch me use the method in this mini documentry.

looking at many other videos of me and my friends you can see the same method.
Posted by Jimmy Talksalot at 10:40 PM