I AM JIMMY THE GIANT SLAYER. 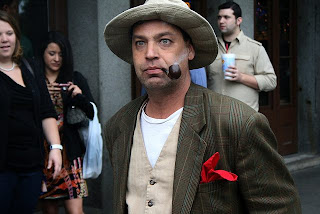 some giant angry man broke through my audience and stormed through my show and broke out through the other side.

something really bad about him.

unfortunately he heard me and broke back into the crowd,

so I screamed and ran,

thankfully he chased me.

around and around we went, weaving in and out of the audience, he almost caught me so I hid behind a fat old lady and kept dodging him back and forth by using her as a shield.

he backed up into the middle of the show cussing at me.

I was in the audience behind the lady and he was in the middle of a circle of about 300 people when he realized where he was and froze up silent and still.

only swaying a little bit, like a flower in the wind....beautiful.

beautiful, because I realized he had stage fright.

and he had it bad.

so I went out marching at him with my chest out lookin like a braggart.

I walk up about 3 feet from him and in a loud voice said, "alright you! ready to settle down and get into the audience where you belong?"

I pointed at the audience and he ran into his new place with them.

shortly after, some other guy was heckling me and I said, "look mister you don't wanna play with me, you see that big guy right there, he's my friend and if you mess with me he's gonna mess with you."

and my new giant friend told the heckler, "yep..don't make me come over there."


you see he was good at thumping people, and I was good at what I did, and by respecting and bring attention to his abilities I made a friend.

i think, in a busking show you should always be building a crowd from the beginning of your show to the end.
Posted by Jimmy Talksalot at 10:47 AM

IN A VILLAGE, THERE CAN BE ONLY ONE. 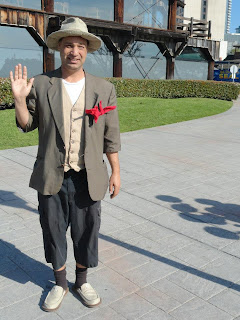 if he persists I just begin agreeing with him and start relating to him using very backward reasoning until he realizes what he has gottin himself into.

which of course, is that it has become a 2 man clown act and I have made him the leader and my new inspiration.

this leaves him trying to figure a way out of the mess and give me back the show as quick as he can.

sometimes they are really smart and will become submissive to my childish commands.....sort of like when the whole village pretends that the village idiot is the mayor or head of town council or chief of police.

one time this didn't work, because I was dealing with a serious bubba redneck in new Orleans who out stupided me and was relating to me as a peer.

this scared me, because I realized he was a real idiot and had a natural unlimited arsenal of god given material over me.

so, I became submissive, to show him I respected him as an authority.

I let him say his peace, I waited for the audience to settled down, then I waited till he was looking around wondering why everyone had been laughing.......

then I noticed his powers were weak, because he was thinking.

seeing he was vulnerable like the last crippled deer running behind the herd , i pounced like a wild cat!

"LOOK! there's only room for one idiot on this corner...and that's ME! you need to go down the way and find your own!"

after he walked down the way (looking for a corner I guess), I had to wait for the audience to settle down again before I could finish the show.
.
.
.
.

Posted by Jimmy Talksalot at 10:42 AM