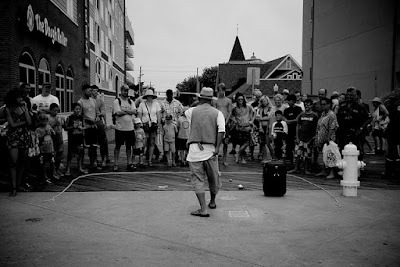 
The real Sandy (who worked out of New Orleans) would stop someone, hand them his hat as an anchor, then pull a small rope out of his hat as the guy held it. He'd do the trick and then tell the guy he made his living by people putting money in the hat...which of course was still in the guy's hand.

Sandy would just keep looking in the hat in the guy's hand, and wait, looking up occasionally then silently back into the hat.

He'd get paid, he'd grab the hat and vanish back into the stream of pedestrians down the sidewalk.

Well, one day I was low on gas and in bad need of a pitch. And there lay two miles of beautiful boardwalk, Chock-full of people. The only problem? Busking was illegal there, and it was peppered with tough small-town east-coast cops.

So I shortened my show to six minutes, working out of my pockets so I could just walk after I got the hat.

Up and down that boardwalk I went, from one end to the other, using the crowd of pedestrians  as camouflage to move. Every six minutes I'd bang up a new audience with the stick, all the while keeping track of the cops and the irritated shop owners.

Then I got confident.

And yea my brothers, pride cometh before the fall.

They got to me and huddled around me, and the one in charge said, "Ah Ha! We got you now!"

Me trying to Look bashful, I said, What do mean officer?

They said, "Don't play stupid with us! We've been chasing you for two days, It is prohibited to work the boardwalk."

I smiled nervously and said, I had no idea officer, how can I cooperate with you.

He saw me trembling and said,

"Look, the reason it's prohibited is because, we don't want you congesting the boardwalk and bothering the shops, but you have proven you aren't doing that, because every time we answer a complaint you aren't there. And I like you. So come with us, we are gonna show you where we want you to work, and you're gonna stay right there, you're gonna keep it at ten minutes, and you're going to control your crowd, got it?"

I worked there for three months, the only busker on a packed two mile boardwalk, it was a good run.

Thanks Sandy.
.
Posted by Jimmy Talksalot at 2:40 PM