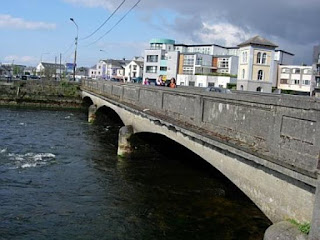 As I walked through town, I saw pubs full of drinkers, real drinkers, not these mamby pamby drinkers we see here in the states. And mind you, this is coming from a guy who hails from New Orleans.

I saw other things, I saw gentle innocent things I wished I could see in america, like the man by himself at a bar stool, who swung around and sung an old Irish song, and all the patrons stopped what they were doing and began to sing with him with arms over shoulders, it made me feel like we were all brothers. I saw this over and over again around town. We don't do that here, people would give him dirty looks and try and ignore him.

I also saw brutal, brotherly, and foreign things. As I walked down a street lined with pubs I saw men again arms over shoulders, cigarettes hanging from their mouths, laughing, with bloody bruises on their foreheads and single blackened eyes and missing teeth, and head butting, they were friends who worked hard and played hard together. And this is where, I thought to myself, I would be working in the morning.

In the morning it was a different crowd, it was families. They loved the art of busking and cheered and played and payed, until that one show, that let me know I should be more aware.

It happened on Shop street in front of the Oscar Wild statue.

The show started like any other, with smiling families. Then two big Irishmen with buzz-cuts and work clothes, stumbled brawling into the middle of my show, completely unaware they were the center of attention, their fists looked like square hammers and everyone could hear the mean banging of the blows into the men's stone faces. Blows that would normally kill someone, seemed to only egg them on. I saw teeth and blood flying.

Then I saw a woman push her way into the show, shouting. She wore a farmers church dress and walked up behind one of the men and slapped him on the back of his near bald head, it was a cold day and it left a mark. It got his attention so she could tell him to quit playing with his "little friend" and come along, they had things to do.

The husband looked at his friend apologetically, searching for permission. His friend had a look of irritation and hurt feelings and just nodded. As the couple walked off, the friend stared at the ground sad, like a kid who lost his friend and finally walked off.

When it was just me and the crowd, still standing paralyzed by the scene, I looked up and said, Well now that they're done with their show, I guess we can get back to ours.

A few days later, on a pitch infront of a pub where buskers and artists hangout, some fellas who looked like farmers came up to me after my show and asked me if I was from the country, they had thick accents with Gaelic words, so I misunderstood them at first, and I said, no I'm from the states, and they said, no we meant from the country like outside of town. And at that moment I realized they thought I was a hillbilly. So looking embarrassed I said, yes. They said, don't worry Lad so are we, that's why we came over to hang around you. So there you have it we are a brotherhood of sorts. As we were talking, a bunch of the local artists from the pub came out and said, we're going to buy you a Guinness. I said, no that's alright I'll just have a cup of tea. They said, yeah that's the problem, you've been here several days and only drank tea, that's not how it goes here in Galway, you will have Guinnes.

I had a Guinnes. The best I ever had.

Galway was a tough town, but I think Dublin was tougher. You can feel it when your there. I had a student who went there and lost an eye, he was on work trip, out on his own, and some young thugs jumped him.

When I first met that student, he looked up to me, now I look up to him, he's paid more dues. When I first heard about it, it broke my heart. I always felt some responsibility for what had happened to him, so I tell you now fellahs, when you come out to these sidewalks,

Beware, there be monsters here.

P.S. This article was brought to you by the gracious donation of my friend West Evans fellow busker.

Posted by Jimmy Talksalot at 10:02 AM