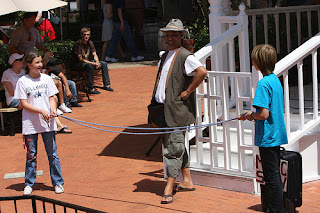 The reason I get jobs at these places, is so I can live in one place, for a long time, with a stable income. It gives me a home-base to put my family. If I decided I don't want to go on a work trip, I know I can still support my family.

Other advantages of working places like this. is that you have a security force looking out for you, you have a market manager and their staff promoting you, and using one of them as a reference gives you more credibility in the community and will allow you to open other pitches in town.


Getting a job working for tips at a mall can be difficult, what I do is go in there and ask them to pull my name up on the internet and check out my publicity around the world. Next I ask them to audition me. I do this on property for their pedestrians just like I would do a normal show only I leave out the hat.

Getting the gig is not as important as holding the gig. This is something that most buskers can't grasp, because it goes against the very nature of being a busker. You have to lose money to make money.


You Have To Lose Money To Make Money.

I could go to a market and make huge money in two weeks, crazy stupid money and blow that pitch out and they would throw me out of there in a month. Or I could lose money and make a steady income for years.

When a busker goes to a private market and sees the crowds and money, they go into busker mode and blow out the pitch. They build huge uncontrolled crowds. They get greedy and obnoxious and run wild hatting hard and pointing people out in their audience to mock. They use blue humor for shock value. They work close to shops and venders, because "that's where the money's at." They keep pushing the envelope with security and management to do what they want instead of playing by the rules. They fight with other performers over "the good spots" and ignore seniority.

So what do we do?

First, we need to think about the house we are trying to work.

In this house everyone is paying rent, big rent. Venders have a tendancy to want to blame someone if they are not making money, well guess who is first on their list. If they complain enough to management eventually management will decide against you, why because venders are paying their salaries. So stay out of the vender's way.

In this house they are always trying to be build up foot traffic to the market, all the while trying to stay out from under a lawsuit. So don't go offending people in your shows, stick to a bubble gum show and be more aware of what could be twisted up by a lawyer in court to make you and the market look like villains.

This house is a loyal family who can turn on you if you're "not a good fit" so you need to bend over backwards to fit in. Always remember you are the lowest man on the totem pole and that you are going to be the first to go.

After you have been there for awhile you can begin to loosen up a little once you know the boundaries, but remember respect is earned.

I will be writing more on this subject later.

Your Pal.
Jimmy.
Posted by Jimmy Talksalot at 9:46 AM