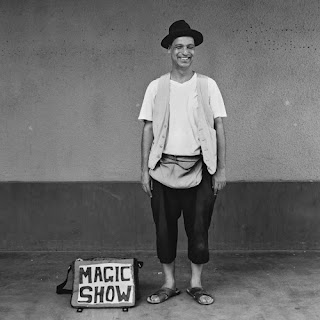 The Character is the most important subject in the entertainment world.


The Character is the thing that makes any entertainer in any field, the best, it's what makes them rise above all the others, and the beginner wisely knows this.

The Character is what attracts people and holds their interest.

The Character provides all the necessary misdirection without even thinking about it.

The Character knows what to do and where to do it, what tricks to do, what the show is about, and what his world view is.

With all this said, why would you want to try and tackle the severe complexities of a show, on your own, when you could just get your Character to do it for you?

Your Character not only wants to do it, but is a natural at it, so just let him do it.

Why do new guys hunt me down for this?

Well, they are looking for him, and he is elusive, and I have spotted him a few times in my life.

Mostly he hides behind the Ego and fanatical perfectionism. If you push those things aside you may get a glimpse of him before he jumps into a cloud of identity crises. But fear not brothers, I know where he lives.

In fact he has a few residents, one of which is in your past, when you were very young and being formed. You may remember him.

If you're a magician, you have preferences to what you believe is a "real" magician and when you watch an act that hits it, you get a certain thrill out it more than you would from a guy that was just good. Because the act that hits it just right, does something personal, it delivers on your anticipations of what a real magician and real magic, really is.

Contrary wise, no matter how good the act is, if it doesn't do this, you don't get that extra thrill. That act may even give someone else that extra thrill, because that's what they were looking for, but it wasn't your image of authenticity.

So lets go back and look for The Character, when you were very young.

In your mind, you may remember what a real magician should really be, not just any magician, not a guy that's good at tricks, but a real one, can you remember him?

When you saw him years ago he was just a foreshadowing of what you are, when you are finally matured.

He may have been the first magician you saw that amazed you or someone you read about, sometimes it's so far back you can't remember exactly how it formed in your mind, but you know who I'm talking about.

So when you go shopping for a costume, buy his clothes. If you see an object he would own, buy it. It doesn't matter if you don't have a trick for it, because he knows what to do with it, and he will make a routine for it, even if it's not a magic trick.

Try and remember him, how does he commute, does he drive or ride a train, or a bike? What ever it is, you will need to commute that way.

Learn to do these things and have the same habits.

Become him and mature.

Sometimes new guys have a tough time with this, either they have skeptic hang ups or simply are not analytical enough, both of which are laymen symptoms and need to be shed in order to be a Magician.

Note: yeah, I know I sound crazy here, but space forbids from better explaining reasonable justifications, I have written about it elsewhere and will be writing on it in the future.

But the following may help.

And don't be confused, we are not talking about the land of -make- believe, that's in a different neighborhood and he doesn't live there because it doesn't exist, heh, that would be crazy, right?

The land of belief is not engulfed in materialistic reality. In the land of belief people are free to be who they are and want to be, not what they are told is sane or at least the present standards of sane. In fact many Characters in history have changed those standards with the impact of their will...for better or worse.

In this land, practicality is more important than being pigeonholed in the despair of skepticism and the philosophical interpretations of empirical science.

Or, in short, lighten up, and let go of the facts. Stop sucking all the fun out of everything.


If you use your imagination more, you won't have to go looking for The Character, because he'll be attracted to you. He'll come to your house, start telling you what to eat, how to look, and spend your money, it's really annoying sometimes, but you won't have to look for him.

Many Magicians have a real problem with this and that is why they can't find their Character. How can they find him if they don't believe in him in the first place, duh.

I was once talking to a layman after a show and told him most magicians don't believe in magic, and he laughed out load and said, "Isn't that sort of like a lawyer, who does believe in law."

we are telling people it's magic, and we don't believe it ourselves, ha.

We are telling people our Character is real, and we don't believe it ourselves, ha.

If your playing poker and you're trying to bluff and you don't believe it, you will leave a tell.

You can have the best moves in the world, but without a character you won't have a show.

There's another place the character lives.

He lives out there in the minds of your audience and on your face. You see, they can see him, even if you don't see him in yourself.

And they will treat you like your the character.

I'll explain, when I first started out, I wanted to be a steely eyed frontman like my hero Sonny Holliday. I wanted to be a well dressed inner city street smart, dangerous guy, with direct sharp witty patter.

The audience tore me to shreds.

The only time they liked me, was when I failed at a trick, or said something stupid and didn't know it.

Well I got hungry, so hungry I stopped listening to my ego and changed gears. I remembered a character from t.v. named Barney Fife. He was a scrawny foolish deputy, of a small town, who thought in his mind that he was big lawman. The audience would find themselves routing for him out of pity.

So I took the same idea, and essentially I became a Barney Fife trying to be a Sonny Holliday.

The audience saw a clumsy fool trying to be Swift Rico Suave.

And Bang they loved it, and my shows finally began to work. The more I cultivated this character the more it evolved into my real character which I use now.

The point to this is the audience can see your character for who it really is and if your in tune with your audience and you have an understanding of other characters and character theories, you can find your character.


This brings us to The Character's favorite apartment uptown, he loves to live in authenticity.


The absolute key to a character in my opinion, is authenticity. The audience can smell a sham and they friggin hate it. A bad character is a torture to watch. If your trying to fake it until you make it here, just stop that, your killing us, stop, we see through it, stop, please stop.

It would be better if you just went back to reciting a memorized monotone script, at least it would have chance at being so bad it's good.

Because faking a character never works unless that's the obvious shtick.

Any way, don't do that, don't be lazy, learn your character. Be that character. And choose a character that is real.

I'm going to end here, and I realize, I have more to explain, and this is why I'm going to write a series on this.

Also, I will talk more about character authenticity later in up coming articles, because I find it to be very important, but until then happy hunting.

Your Pal.
Jimmy.
Posted by Jimmy Talksalot at 1:00 PM